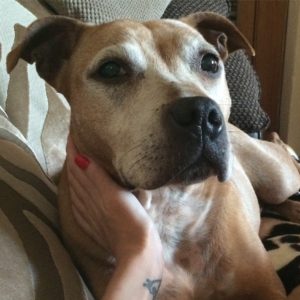 October was a roller coaster of emotions for me for many reasons. And this is why…

Mondays can be sour as the weekends tend to feel like they aren’t long enough. We find ourselves wishing away the week until it’s Friday again. I hold my hands up, I’m as guilty as the next person but I’m working on changing my mindset.

It was a Monday when my day went from bad to worse. I’d received penalty parking notices and then to top it off, upon returning to my car that evening, after a long commute on the London Underground, I found my car had been broken into.
I didn’t realise it at the time but I think the universe was trying to set me up for an even bigger fall. This particular Monday was an epic fail.

Roll on Tuesday I went to work as normal, only to receive a call a few hours later. My loyal companion, my pooch Harley had passed away. She was twelve in September, yes she was old in dog years, but she was still active and as spritely as a young pup. I immediately left work to return home, to say I was a wreck on the tube is an understatement.

Truth is twelve years ago I never intended on even getting a dog. Although I grew up always having dogs I didn’t envision getting one after our family dog had died.

But when my Dad asked me to take him to visit a litter of puppies. I agreed, this is where I tell you I was I adamant I wasn’t getting one. Yeah right, never say never.

They were three weeks old at the time. I leant over to take a closer look when this tiny red pup with white freckled paws and a white line on her nose wobbled toward me. I reached out my hand and she licked me. I was a goner, I said: “That’s my dog.” 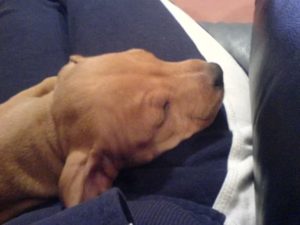 I didn’t choose her she chose me, and do you know what? I didn’t know I was even missing her until she came into my life. At eight weeks old I picked her up and brought her home.

It was official I was now a dog mum, we had three generations in the family, my Dad still has her Dad Kai and my brother and his partner at the time had his Mum, Macey.

There was, of course, a debate over her name. My mum had suggested Scooby Doo, she was all ears and red, but it didn’t quite fit. For the briefest moment, I had even considered Briseis (From Troy). Let’s just say it was quickly ruled out, the laughter from my Mum was deterrent enough. 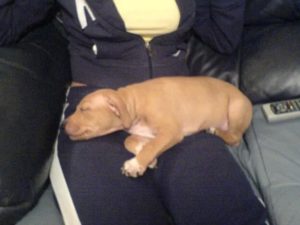 It was when I mentioned my Dad’s Harley when I kid you not, she stopped playing with her toy, ears poised and she looked at me…boom she had her name.

She slept with me the first night, and after that, she had a bed made up for her under the stairs. She would fall asleep on my lap. I’d carry her to her bed and cover her with a t-shirt of mine. Until she began taking herself to bed. She’d wake me in the mornings with her little puppy barks. Then she migrated to one of the sofas in the living room which she quickly claimed as her own.

It was only during the past couple of years she began making herself at home on my bed. Weekends at first and then gradually all at once. I miss waking up to her in the mornings, even though she was a bloody bed hog. I miss those cuddles.

Her companionship was priceless. Whenever I’d come home she would greet me with so much love and affection, there really is no better welcome. She was my constant and a damn good friend.

My nearest and dearest will tell you, she really was a girl’s best friend. My Mum loved her just as much as I did, and learning to live without her is hard. And writing without her by my side is even harder. To some, she may have been just a dog but to me, she was my world.

And then on top of losing her I had my debut novel to think about. I had already made the decision to go ahead with a release date, unaware she would die the week before. So it was bittersweet, I almost pulled out but the book was already written. Final stages formatting and it had been a long time coming. I felt like I owed it to her and all the countless hours she spent by my side while I wrote at all hours. 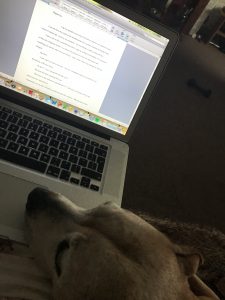 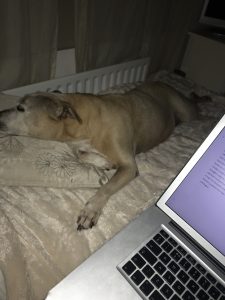 It helped having such supportive family and friends. I can’t thank them enough, the ones who have been there through my grief, even when separated by oceans. I love my tribe so hard.

One day I’m sure I’ll invite another dog into my home and my heart. Not to replace her, as she’s irreplaceable. But it will be because I owe it to her and how much she loved me and I loved her. I’d eventually like to gift another dog as much love.

I’ll always miss her but I thank the stars above she went peacefully in her sleep, and at her happiest. I was blessed she chose me. And just like my final acknowledgement in Where the Heart Is.
If ever there was a dog in the form of a soul mate, it was her for me. Until we meet again… 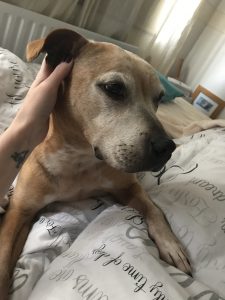