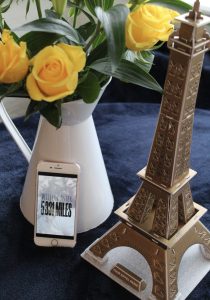 I didn’t know what to expect when I began reading 5,331 Miles, but I was was not disappointed.

It’s a second chance romance but not in the typical cliche sense. I loved the style in which it was written, a single point of view from young to new adult.

Plenty of times I had to grit my teeth where Jaxson was concerned. And I’ll admit on more than one occasion I wanted to clip him around the ear hole. Honestly, what was he thinking?

I know a lot of readers will resonate with Mirabelle. I know I did, I’ve been in her shoes one time or another. Like me, you’ll find yourself rooting for her, whether that means her being with Jaxson or not. Jaxson works hard to redeem himself that’s for sure.

“I miss him with a desolation and longing that feels like a starvation that is never fed. My entire body hurts with the missing.”

I finished this book in under a day between my day job and adulting. I didn’t know I needed this book until I read it.

Also shout out to Holmes Chapel, England. And Winston’s cameo too.

If you’re looking for a book to keep you invested, with a whole lot of heart and a little something extra, then this is the book for you.

5,331 Miles by Willow Aster is Available now. A beautiful story of friendship & love…

Jaxson and I devised a life list when we were kids in Holmes Chapel. Just a few things on that list:

*Climb the Eiffel Tower.
*Visit every zoo in the world.
*Eat peanut butter every day.

But all the promises he made dissolved into dust, so when he comes around years later wanting to go live out our list, I want no part of it…or him. The universe seems to agree with me because everything we try is a disaster.

The heart though—it’s a tricky beast; I’m just not sure mine is strong enough to survive Jaxson one more time.

No Time To Blink by Dina Silver – Review