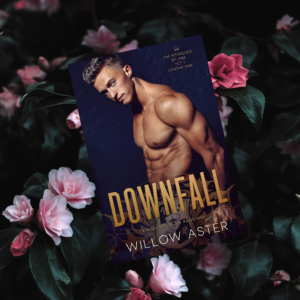 This is unlike other books written by Willow and yet I loved it. She has a way of creating characters and world-building, which drew me in. I didn’t want to put it down and read it in one sitting. Perfectly good use of my Saturday.

Luka, love to hate is a strong definition but it’s true. He is a real piece of work. There were times I wanted to strangle the boy. His character is such a contradiction, hot one moment then cold the next.

But bravo to Eden who despite all the trials and tribulations of adhering to her royal obligations. She remained true to herself, her strengths even in her weakened state, were still very becoming of her. And like me, you’ll find it hard not to resonate with her.

Although this is part of a series, Downfall is a stand-alone and doesn’t end on a cliff-hanger.

I can’t wait for Exposed.

I was naïve to think my marriage to Luka Catano might work.I was infatuated with him from afar…Until I met him.He loved the challenge of his next conquest, anyone would do…Except me.A wife was never something he wanted.Torturous was not a strong enough word to describe how I felt when I was in a room with Luka. Besides hating nearly every word that came out of his mouth, I also drowned with lust every time I looked at him. At times I thought he might feel the same.But nothing prepared me for what his family would make me become.

When the Saint Falls (Westbrook Three, #1) by A.D.McCammon