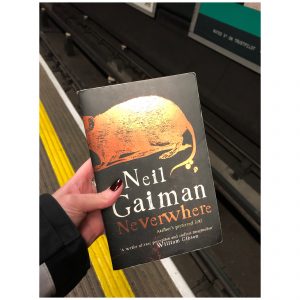 Neverwhere, was a re-read for me and a must read.

There is no better way than to read about London Below, The World of Neverwhere, than while commuting on the London Underground.

Interestingly bizarre but in the best possible way.

Neil held me captive with his style, humour and characterisation.

Neverwhere, was a BBC adaptation before Neil wrote the book, and I for one am damn glad he did.

‘There are little bubbles of old time in London, where things and places stay the same, like bubbles in amber,’ she explained. ‘There’s a lot of time in London, and it has to go somewhere – it doesn’t all get used up at once.’ ‘I may still be hung over,’ sighed Richard. ‘That almost made sense.’

Under the streets of London there’s a world most people could never even dream of. A city of monsters and saints, murderers and angels, and pale girls in black velvet. Richard Mayhew is a young businessman who is about to find out more than he bargained for about this other London. A single act of kindness catapults him out of his safe and predictable life and into a world that is at once eerily familiar and yet utterly bizarre. There’s a girl named Door, an Angel called Islington, an Earl who holds Court on the carriage of a Tube train, a Beast in a labyrinth, and dangers and delights beyond imagining . . . And Richard, who only wants to go home, is to find a strange destiny waiting for him below the streets of his native city.

Review – The Boy, the Mole, the Fox and the Horse by Charlie Mackesy.