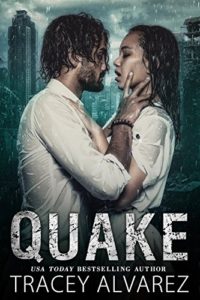 He’ll shake her foundations…
Ana Grace is living a single mother’s worst nightmare. Separated from her two kids by a catastrophic earthquake, she’s trapped in her office building with a man she’s only just met. He’s a sexy former soldier, and possibly the only man able to help her navigate the dangerous landscape home.

Daniel Calder is tired of failing people he’s tried to help, but since Ana is his younger sister’s boss, he’s caught between a rock and a hard place. That rock keeps shifting under his feet, shaking his determination not to become emotionally involved with another damsel in distress.

But when an unforeseen enemy rises from a city in chaos, Ana Grace and her family are in the crosshairs. There’s so much more at stake than just their hearts, and the clock is ticking.