Somewhere Between Us by Holly Hall – Review 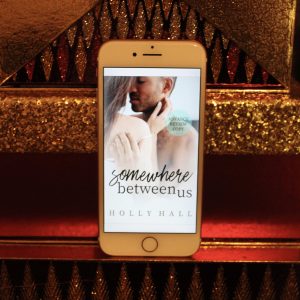 Somewhere Between Us, did not disappoint, after a year of waiting Holly manages to deliver this little beauty with the softer side of her writing style.

Cameron and Jeremy are an unlikely pair from the beginning. This story evolves with just the right amount of angst and builds up, in all the right places. It flits between past and present.

Sometimes you can love someone, but it isn’t the right time. Honestly, I think this was the case with these two. Both Jeremy and Cam needed the ten years of separation to learn and to grow, to have a greater understanding of themselves and love.

The best thing to ever happen to Jeremy was his little boy, Asher. Although Jeremy might appear somewhat standoffish upon his return to his hometown. It soon becomes apparent it’s just a front to cover up something much deeper.

Cam ends up in an unlikely relationship during that time, and it takes her a while to learn her self-worth and to know she deserves more from life. She was always compelled to do the right thing, even if that meant holding back and hiding behind her fears.

I found this book to be an easy read and a page turner, with both feeling and a sense of honesty — just the kind of book I needed. Not too heavy, but still brings you the inner feels.

Holly’s back and has eased us in gently with this lovely gem, and I can’t wait to see what she has in store for us next.

I received an ARC for an honest review.

We were an unlikely couple: the cocky athlete and the preacher’s daughter. Once he finally won me over, he wasn’t supposed to break my heart.

Ten years later, he’s back in our hometown. Only now, he’s different. A cunning businessman, a big-city resident.

…and the father of someone else’s child.

When he left town, I stayed. Now I’m a teacher by day and aspiring artist by night. Dating the one man he hates more than anyone else: his brother.

I have no business falling for him again; he traded this life for one he thought was better. One that didn’t include me. But history has a way of repeating itself, and old flames? They don’t always go out.

Promise You by Fabiola Francisco – Review

To Kill A Mockingbird, by Harper Lee.