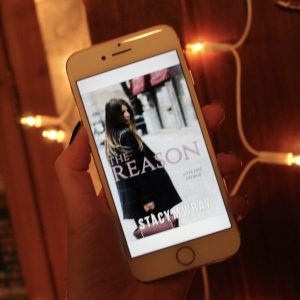 The Reason was such a lovely read. And for anyone out there uncertain if this will be your cup of tea. I think like myself; you’ll be pleasantly surprised.

Lily and her husband have to come to terms that their marriage is over.

Wanting to make their separation as amicable as possible for them and their children, but due to unexpected circumstances, they end up having to put this on hold. Although they are still living together, they are living separate lives except for co-parenting.

When Lily first meets Casey over the counter where he works, at first it’s a smile here or an acknowledgment there.

But he manages to get her heart pumping, and she feels things not even her husband Mark was able to evoke.

Casey doesn’t just stroke her ego, they have a connection, but when he finds out she’s still married even though they are separated, he decides to back off completely.

It’s only by chance they meet again and ignite something they never had the opportunity to before.

Yes, there is an age gap, but love doesn’t have an agenda. You love who you love. We see the trials and tribulations of how Lily and Casey ultimately try to make their relationship work, how they found each other not once but twice.

There was no sordid love affair or cheating in Lily’s marriage. Lily and her husband tried to make the separation as easy as possible for themselves and their children.

I’m glad I was offered this as an Advanced Readers copy, having only read one of her other books, I know I’ll be reading more.

Lily Turner was married to her best friend. Trouble was, it wasn’t much more than that. After the romance ended, so did the marriage.

When Lily met Casey Dunlap at a local café, their attraction was immediate, yet innocent, his sexy charm instantly drawing her in. When their harmless meetings slowly evolved into more than just friends, Lily struggled with the magnetic pull Casey had on her, not knowing what to do.

It should have been easy – she was no longer going to be married. She had no reason to drag her feet… Except that Casey was nearly fifteen years her junior – only ten years older than her teenage son.

What would her kids think? How could she possibly do this?

According to Plan (Stone Haven, #2) by Victoria Ellis.