The Tattooist of Auschwitz – Review 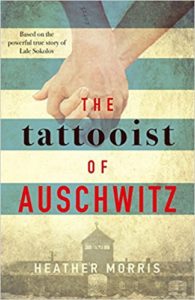 Based on the powerful true story of Lale Sokolov.

Like countless other men, women and children he was stripped not only of his freedom but also his dignity, name and identity.
In it’s place a number — 32407.

Put to work as the Tätowierer his job was to brand fellow victims by scratching numbers into their skin — his survival depended on it.

Lale always had an appreciation for women, to him all Women were beautiful but it was at Auschwitz-Birkenau that he met the love of his life, Gita.

Although his position allowed him to move around more freely it was not without risk, he could still have been shot on sight, tortured and still face a firing squad.
A heinous reality in which he could have been sent straight to a Gas Chamber, or worse if that were even possible — being used for deadly human experiments — at the sadistic hands of Josef Mengele.

Using gems and diamonds confiscated from all prisoners upon arrival, he was able to set in motion for the ones sorting through belongings to sneak him what they could. Using them as currency for food rations to be smuggled back into the camp.

In turn he would share everything he could amongst his fellow prisoners, this small act of defiance and heroism was the difference between starvation and a slow agonising death.

“To save one is to save the world.”

“Choosing to live is an act of defiance, a form of heroism.”

After surviving the most unimaginable crimes against humanity, his fear was that by choosing to participate in the destruction of his people, in order to survive, he too would be judged as a perpetrator or a collaborator.
But to Gita and so many others he was a hero.

It took him sixty years to share his accounts of the most notorious acts of genocide in modern history.

Atrocities committed by Nazi Germany before and during World War II destroyed millions of lives.

Lale and Gita were two ordinary people who found each other in the most unfathomable way, despite this their love survived.

I read this book in it’s entirety, heartbreaking and brutal the reality of the past. It was in the last couple of pages reading the author notes and the foreword my emotions went into overdrive, bringing me to tears.

Lale lived his life by the motto: ‘If you wake up in the morning, it is a good day.’

An unforgettable and poignant read

The Tattooist of Auschwitz: the heart-breaking and unforgettable Sunday Times bestseller
by Heather Morris
Link: http://amzn.eu/4h9KceM

In the Gray (In This Moment Book 3)