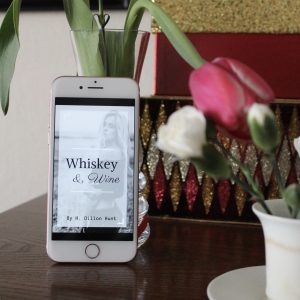 It’s a given, any book which references Supernatural was always going to be a win in my book.

Whiskey and Wine is a sweet and heartfelt story. I loved the dynamics between Ellie and Dean, he pulls while she pushes. And if I’m honest, I’ve been left with a little bit of a book crush where Dean is concerned.

I look forward to more from this author in the future.

Ellie Ray Vaughn needs to start over. A clean slate, a redo. She’s starting college and running away from an abusive ex-boyfriend and all of her mother’s mistakes, which means she’s trying to avoid two things. Music and men. Unfortunately for her, Dean Thomas is both of those things. He’s arrogant, pushy, and completely infuriating. But Ellie can’t seem to shake him, and in Nashville, it’s hard to run for the music that runs in her veins. They form an unlikely friendship as she tries to stifle the heat between them, but Dean won’t let her hold anything back.

As far as Dean Thomas is concerned, nothing matters but music. He’s come to Nashville to pursue one thing, a record deal. Well, two things if you count all the girls he chases. He’s always been chasing the same ghost, but he doesn’t even believe she exists anymore…until he lays eyes on Ellie. She’s hard-headed, passionate and the most talented musician he has ever met. So why is she trying to stifle her talents, and her feelings?

All My Truths & One Lie by Fabiola Francisco – Review

Our Dust Has a Pulse by Malynda Schlegel – Review

The Tattooist of Auschwitz – Review